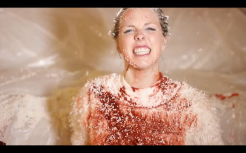 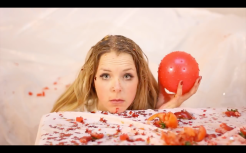 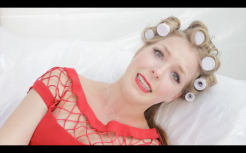 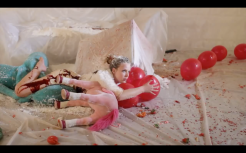 Three years ago my music video- REDRUM  came out to the stage and left some interesting impressions! From “you’re a total weirdo” to “I love your work so much!!” I’ve heard it all. I am so thankful people still listen to my music and know me for my video regardless of it it’s to laugh at me. I’m Hallie B Me and will be forever whether I like it or not. Thanks for continued support and if you have not yet seen it you should check it out!

The fair is home to some of the best worst food in town and this year I decided to set out to try some of the most iconic fair foods. From the simple and classic to the new and ~bold~ here are a few of the fair’s delicacies and how they compare.

Each piece is listed in order of appearance in the day and out of 5, all ranging in at 8-16 dollars (obviously all overpriced but it is the fair.)

This was a new bigly advertised dish on the flamboyant front of Chicken Charlie’s, one of the largest players of “fair food” in the area. I have never seen this addition to the illustrated menu but it was actually quite delicious! This interesting combo was by far one of the healthiest meals available at the fair and was a good choice for a hearty lunch. The pineapple was ripe and flavorful and the shrimp was well spiced. The only improvement was that the shrimp was a bit dry but that’s to be expected from a stand that cannot make all their food “to-order.” The sauce provided was butter which was unnecessary, some soy or sweet and sour sauce would have been a better pairing with this interesting meal. I would highly recommend this for a good quick bite that is a refreshing taste from normal fair foods. 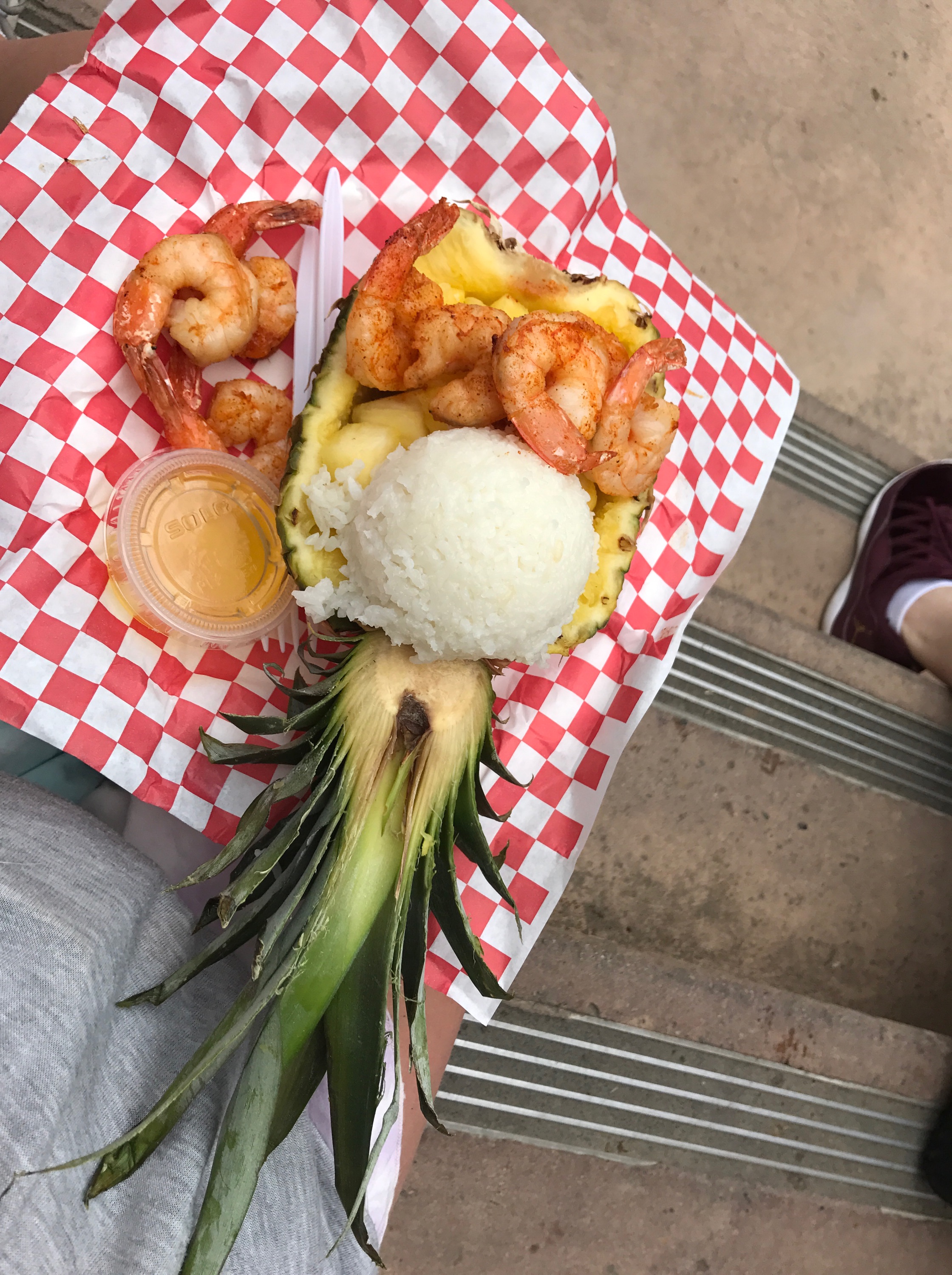 This was a very decent burrito, which is actually saying a lot considering I’m from La Jolla. The ingredients were well mixed and proportioned and the carne asada was cooked almost to perfection. However, clocking in at 10 dollars (once again, not surprised this is the fair) this burrito is hard to compare to better options that are half the cost right outside. The fries also left a bit to be desired and it certainly lacked the authentic flare that is known and loved in San Diego. This burrito is a good option for a hand-held bite that’s quick and tasty! Would definitely recommend if you’re hungry and just want a good lunch. 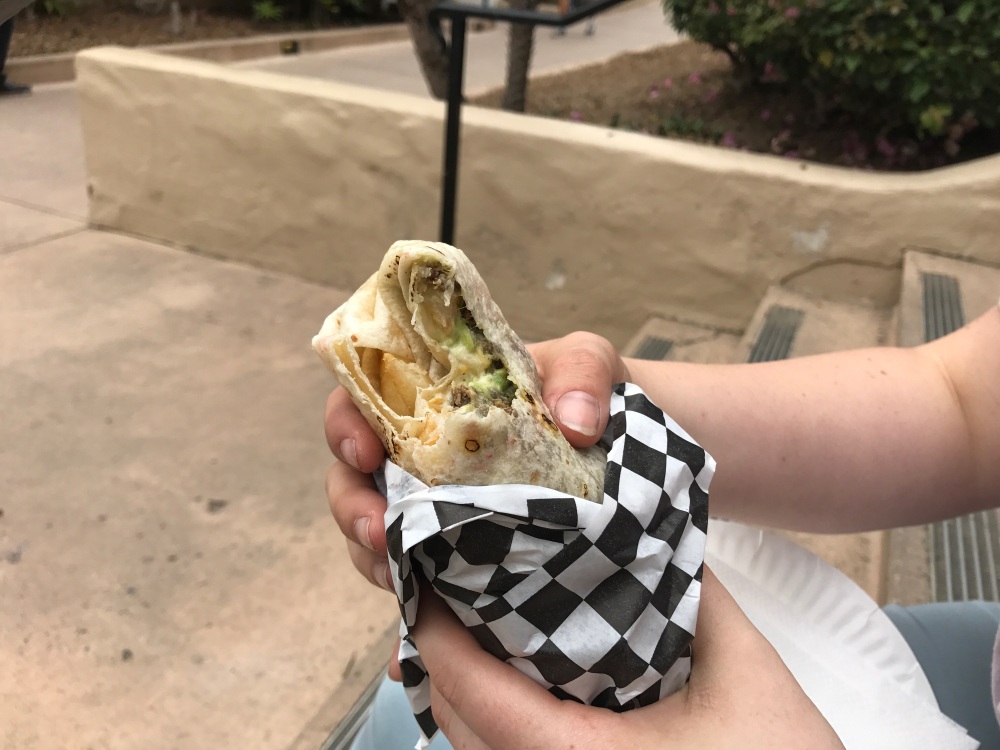 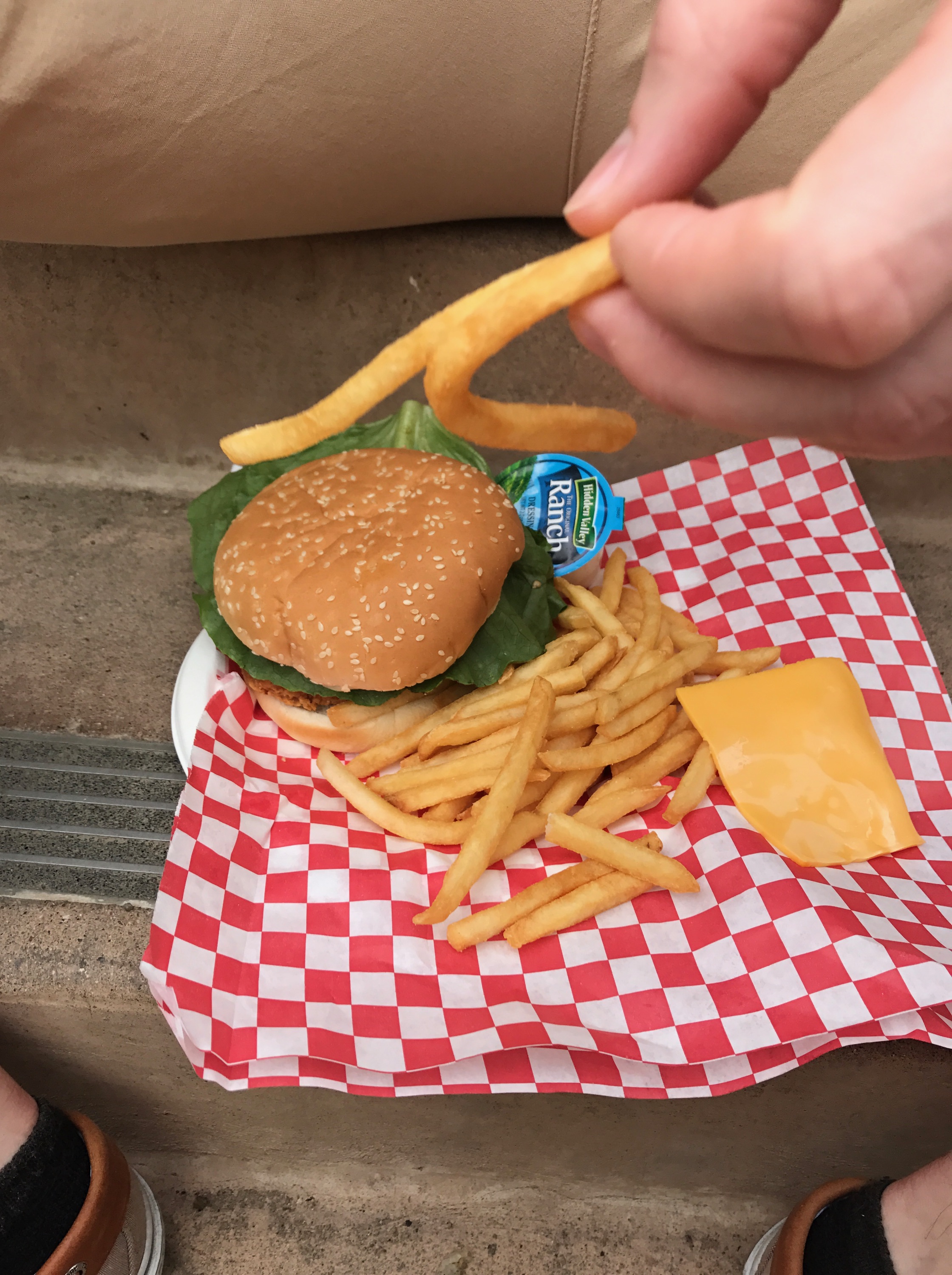 What a disappointment coming from a place that has chicken in the name and is famous for fried chicken. First of all, the order was supposed to be chicken in a waffle which is way more fun, but it was decided that the sandwich would be accepted because it was a chance to judge the classic. The chicken was dry and over-spiced. The breading was too thick, leaving inadequate real chicken to enjoy. The rest was typical store bought bun and toppings. The ranch addition made it slightly better but was just a bandaid for this overlooked piece. Worth 2 dollars and not a penny more. Raise a glass for this 5 times overpriced hockey puck. The fries also sucked. RIP. 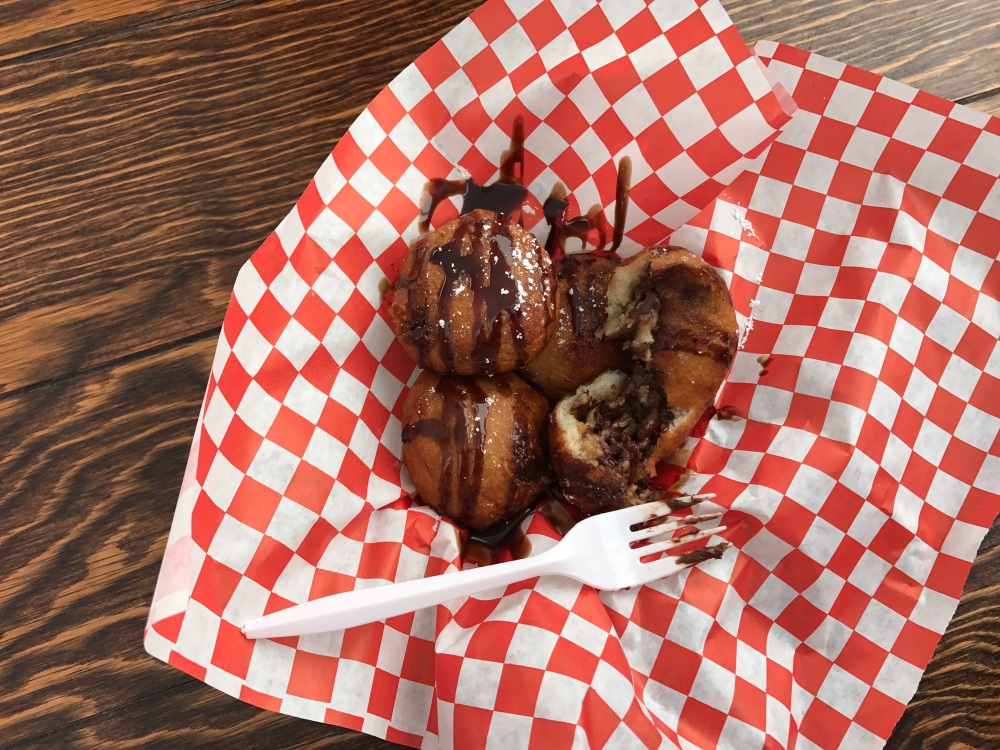 Chicken Charlie’s is back again and frickin kickin with this one. This masterpiece will stop you in your tracks with both on-page and in-mouth intrigue. Holy moly. Remember when you were a kid and you wanted to eat those half baked cookies or sneak some cookie dough from the bowl? Well now is your super-upgraded chance. Their fried cookie dough is hands down delicious AND has the appeal of bold “fair-y” dessert. The only recommendation is to split between two people because it is ultimately rich and sweet. You really only need one or two. For what you can imagine fried cookie dough to be, it cannot get any better. 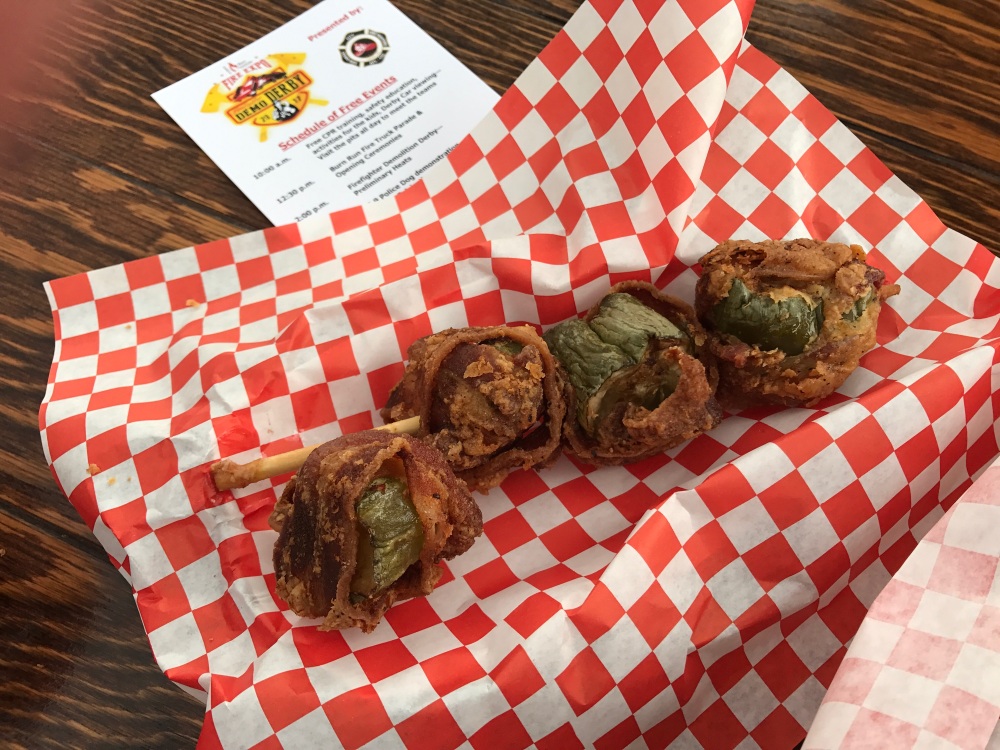 Man, Chicken Charlie’s really is a hit or miss. But then again, they do have a ton of options. I love pickles, bacon and fried foods but this really did not work. The pickles were WAY too thick, the bacon was barely there and there was no breading to make the fried aspect seem worth it. It felt like they just added the fried part on for the gimmick of it. The pickle was soggy and incredibly overpowering. What could have made this so good was thin spears wrapped in thick bacon and then dipped in dough for an ultimate fried experience. This, however, was a cheap knockoff of that and felt like a quickly-made option that, like all other things there, is way expensive. Do not purchase this. It is a ripoff and also looks muy gross.

One phrase goes to this mish-mash of weird, unflattering flavors. WHAT THE HELL. This piece was plastered over the banners in bold and caps, making it (what I think to be) the new specimen of harlotry ready to enter the mouths of innocent and curious fair attendees. I was so reluctant to get this because it looked awful but curiosity got me and I was fooled by the large advertisement. I was made a fool and I am ashamed. This is the embodiment of trying too hard, the epitome of overdoing it and the exemplar of capitalism at it’s worst. I actually spit this out. Somehow I thought they would salvage this piece despite its odd combination of ingredients but once the same overly spicy-seasoned patty they had used on my chicken sandwich touched my tongue, I knew I had been truly betrayed by Chicken Charlie’s.

Overall to this food quest there was no medium. No fair piece should be average as that is not the goal. Every stand at the fair aims for shock value and with everything, good or bad, you are always left interested. Chicken Charlie’s, with locations and ads everywhere, can be amazing but also must be taken with a grain of salt. Just because it is thrown on the sign and riddled with chromatic glory, does not mean it is good or that it really is even supposed to be. Moral of the story, get what looks and sounds good to you, not what looks crazy or makes you wonder how flavors could work together. Also, stay away from country-wide food staples. I’ve had pizza, burgers, sandwiches and more at the fair but often they are a let-down. Try fair favorites, as this fair is a big one and does it right, or try weird foods that look mouth-watering. Whatever you do keep Del Mar 2017 interesting.

P.s I wanted to sign this with that line from the Seaworld Arctic Thunder Ride “This is the Snowman, over and out…” anyone remember that?

This is your very first post. Click the Edit link to modify or delete it, or start a new post. If you like, use this post to tell readers why you started this blog and what you plan to do with it.

This is a text widget, which allows you to add text or HTML to your sidebar. You can use them to display text, links, images, HTML, or a combination of these. Edit them in the Widget section of the Customizer.